Observability, Debt or the Bret-Victor-Ization of distributed systems

I've been thinking how the different way of conceptualizing cost (in the broader sense of investment) in Cloud changes the tech debt metaphor. It never was a good metaphor to start with and allowed too many excuses, but I like the idea of expressing a suboptimal, incomplete or leaky level of abstraction somehow, as a dialectical, critical tool. I like declarative systems because they allow comparison of state over time, but they do limit expressiveness of our mental models, and omissions, when writing down code. Debt, with its pseudo-quantifiable touch is such a mental model limit. No one wants to keep ADR's for each of these*. How to solve this?

It's exciting to see how the next step in polyglot programming is taking stacks apart and designating a layer to developer experience for humans based on “progressive disclosure of complexity”, and how we argument for this is feedback time or, in other words, Software Delivery Performance. What a16z recently called The Decade of Design (but combined with craft and lean), the best example probably being Stripe which shows that beautiful API's and documentation and a beautiful website (and beautiful books) might after all correlate, and maybe because they take empathy to their heart (no surprises here for anyone who has seen or used PayPal).
When I first saw this at Google working with Dremel / F1 and all the Data Mesh tools around it, an ontological, rhizomatic approach to data - without oversight, yet with structure, as side effect of, essentially DDD (or set / category theory, referring to ontology below). And the same when seeing Borg and the Service Mesh around it. Both were built as products with a builder focus, with "a builder" meaning universally anyone who wants to build something, meaning to contribute to a shared idea. When we say everything-as-code we need to go beyond engineering components, we, and that means everyone and the maximum of diverse perspectives, need to look at the product and all of its users. Similar to medical doctors who moved away from seeing "man as machine", or architects seeing the city or the house as a machine, we are slowly moving away from seeing a software system as a machine, perfectly controllable. Technology is not neutral, and a constant process and struggle that goes far beyond engineering.

With observability our systems become not only monitorable or measurable but tangible to every part of the ever-emergent (just as ontological) socio-technological system, and they give us better feeling of time, to avoid bias like Reification and Goodhart's law. In other words, it establishes a way to talk about the ontological difference between what we things our systems are and what they really are by leveraging category / set theory (maybe?) or OOO.
We can check those biases by seeing the effect of our ideas in the real world (the production system) and iterating on the real effect of systems: The Bret-Victor-Ization of distributed systems.
Very much in the spirit of SRE's focus on user happiness or user pain - in other words empathy. Systems are for everybody and need to involve everybody, all of its unexpected users (something real world architecture finally starts to do). It's worded a little technical but "SLOs are the API for Your Engineering Team", where API essentially means OKR and SLO means promise to all users, is a catch phrase I like.

But what I really like about observability is, that is also shows us there is not only one system - the one in the flowchart, in the architecture PowerPoint, but there is many, constantly emerging ones that are in the heads of all users. "Deep" Systems are never fully up or down and us humans merely hint intents at the complex, speculative, declarative system, which turns our relationship with the system from a fixed state SDLC into, essentially, promise theory, read Mark Burgess 2019:


It's shown that the concepts of statefulness or statelessness are artifacts of observational scale and causal bias towards functional evaluation. If we include feedback loops, recursion, and process convergence, which appear acausal to external observers, the arguments about (im)mutable state need to be modified in a scale-dependent way. In most cases the intended focus of such remarks is not terms like `statelessness' but process predictability.

The good news is that we've learned a lot of concepts of deep systems from recent advances in Machine Learning (ML). In ML, Goodhart's law is called overfitting. ML's dropout regularization we call canary or A/B testing, embeddings can be understood as modularization or bounded context (let's not discuss whether that means sets / categories), and so forth. I'm not proposing to use ML to 'learn' the architecture of a product, but understand the research in those techniques to come up with our own tools to explain the real structure of systems as a discursive, critical tool, not as ideology. Coming back to my experience with Dremel, I was stunned how normal and easy it was to embed ML into it - for instance to test a hypothesis against a large body of logs by training an explainable random forest.
In that sense, a product is just promise (an old marketing adage, like a product is a story that people personally want to be fulfilled). Like quality is defined in the ISO sense as the sum of expected properties, and the extent to which they are fulfilled in reality (and maybe how close marketing comes to that, or goes beyond). When we decide for a product, we instinctively trust it (with some bias), and we accept the promise of its quality and value. Internal understanding of a product is therefore like quality management. Unsurprisingly, SRE very much acts like the steward of quality expectations and promises of its value, the SLO. Which, I guess, is why ITIL recently introduced a Service Value System, too (I'm skipping the "Value Chain" here, seems they couldn't completely detach from Taylorism / Fordism internally). Given that a product is a promise, and so are the relationships in our system, we can conclude that an ontological analysis of the whole system is possible - as long as everyone is included, the socio-technical system is open for participation, and we aim to reduce bias a much as possible.

Recently I stumbled over a fascinating analogy when reading 3 books in parallel which surprisingly touched on different subjects in a similar way, the topic of debt - or the topic of promises: 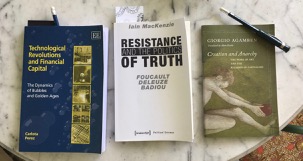 *) I've recently been building a hacky prototype how pairing conversation could be stored alongside code. I got the idea from speech-to-text combined with an Eliza like interface to drill down based on questions rather than free association, where the questions are based on NLP Keyphrase extraction.


**) Since reading Max Weber, I have been fascinated by the similarities of Puritan to Folk Chinese / Taoist idealist promises of a luck and bias-free meritocracy and the equivalence of prosperity, fortune and status which continuously biases the system towards the more powerful. In particular the similarity in manicured meritocracy between the Anglo-Saxon University System and the Imperial Exams which still cast a mythological shadow on the NCEE.
Posted by Jan at 12:26