This post is published in December 2015, when I finally found the time to proof read and check. This post is a snapshot of my thinking back at this time.

For a long time, I've had the reading list on the left panel. However, over time it felt a little bit un-curated. Inspired by a list of recent retweets from Jeff Sussna, especially a post by Mike Sall, I thought compiling it differently could make sense.

Let's dive right in - here is my list of 9 (well, actually 12) Architecture Books every interested Software Practitioner should read:

These are books that give you an initial understanding of what Architecture is about (hint: something "entirely different") without being to engineering-heavy (if you want that, read Francis D.K. Ching), patronising or historic:

Matthew Frederick, "101 Things I Learned In Architecture School". A small, lovely, extremely simple book that gives you a first glimpse of how to think like an architect.

Doug Patt, "How to Architect". An indexical volume of architectural elements, making it an easy reader and introduction to architecture. Mainly because of his great videos, actually.

Anthony di Mari's "Conditional Design" and "Operative Design". Because it shows the commonalities of structural elements and patterns in building and software architecture in a simple, visual way (as opposed the Alexander's "Pattern Language").

As a bonus: Joel Kotkin, "The City". Not strictly architecture, as it is about urbanism, but a great, short, intense history of human habitat, before you read Jane Jacobs.

These are texts that defined contemporary architecture, giving you a feeling of the philosophic foundations of "living and dwelling" - something that is often ignored by engineers talking about architecture.

Robert Venturi, "Complexity And Contradiction In Architecture". Not an easy read, but one of the most defining ones of contemporary architecture. A manifesto against dogma and black and white thinking, introducing the hybrid, notably one of the most often used concepts in IT (often read as counter-example of Le Corbusier's "Towards a New Architecture" and only followed by Bjarke Ingels "Yes is More").

Ram Koolhaas, "Delirious New York". Because it took complexity to the next level, added emergence, and cross-pollination between society and building. Read it as Conway's Law and be astounded. No idea why, after that, it took Architecture so long until Marc Kushner introduced feedback to it.

Kate Nesbitt, "Theorizing a New Agenda for Architecture". An extremely well curated collection of elementary texts that stands out not only as a reader, but for bringing all of those thoughts into a structure that, at least to me personally, was never before so clear.

As a bonus: Fred Brooks' "Design of Design", because it is a software book dealing with architectural design.

Those texts are not directly about architecture, but about the motivations of architecture, it's impact on society and the public.

Adam Sharr, "Heidegger for Architects". Actually the whole "Thinkers for Architects" series is pretty good, and this is just one example. Architects like, and learn, to think from the perspective of other disciplines. Might be a good example for IT.

Stewart Brand, "How buildings learn". Brand is a classic, working on the edge of design thinking/service design since the "Whole Earth Catalog". This is a great introduction into the evolution of buildings and hence an answer to the question: Can architecture emerge?

Geoff Manaugh, "The BLDGBLOG Book". Imho the single best blog about architecture in the interweb, probably the only real alternative to an AA files subscription. The book captures the full spectrum of cutting edge contemporary ideas into one volume.

As a bonus: Jo Steffens', "Unpacking My Library: Architects and Their Books" is a nice tabletop book listing a wide range of architects and their favourite book inspirations - Thomas Pynchon's "Gravity’s Rainbow" is named surprisingly often.
Posted by Jan at 07:03 No comments:

This post is published in December 2015 after I re-read much of Simon Brow's stuff again and figured that, with Structurizr extraction, he is so much on the right way I can stop pondering about that topic - this post is a snapshot of my thinking back in July, which I never really finished due to a unconvincing conclusion.

I’ve actually read "Documenting Software Architecture". ATAM, V&B, DITA and ALM at least ring a bell in my memory. I’ve attended Jazz/RTC, Sparx EA and UML trainings. I can safely say that, in the last 5 years there has barely been a work day I did not use the Atlassian toolchain. Yet, to me it seems there is no truly elegant architecture documentation, let alone knowledge retention, techniques out there in custom software development land.


So why is architecture documentation still so bad?

You have the integrated toolchains on one hand, the legacy of Smalltalk, Lisp Machines, Jazz/RTC/Eclipse/Mylyn and Visual Studio. On the other hand the self-documenting-code and markup world, the legacy of Cobol, like Python, TDD/BDD, Javadoc, Swagger and so on. There are a few attempts to bring the two together, XText, Lighttable, Structure101, and GitHub for that matter, and a few rather academic visual/structural coding systems like Dataflow (e.g. vvvv). Human-understandable documentation, though, still feels like a 2nd class citizen in any larger scale software development ecosystem I am aware of.

The reasons are pretty clear: most documentation systems are either tied to the hip of their very language ecosystem, often as afterthought, and hence not being able to fulfil Polyglot Programming. Or, they have been invented to enforce a given top-down structure, either for waterfall development or as operational support, which is by definition not agile and breaks traceability. Both of these reasons make it tedious to work with documentation. It breaks the flow of feature development, and forces everyone to externalise knowledge into the least common denominator. Hence people named “Architects” or “Business Analysts” still create static documents in more or less nice templates and models, which are outdated the moment they are published, because "the code is the ultimate truth" (unless you do MDD).
That’s a big problem in a digital world. Because software doesn’t just copy real-world business processes, and captures them in a box, anymore. It creates new processes, flows unseen before, that are constantly modified and updated through feedback, until no human understands them anymore. We turn our software into deep learning, minus the human understanding.

At Dockercon, Adrian Cockcroft gave a nice talk about Microservices and how to document the architectural implications. It sounded a little bit like Service/Process Mining, a backwards-looking approach to architecture, more feature/vertical slice/cell rather than layer-based. As such, for me it would fall in the markup bracket from above, a fancier version of Developer Portals in API Management. What I still miss, though, is structure, the levels of abstraction. Not in the UML sense of meta levels, but in the sense of a lean take on views. Without structure, I hate to say it, static documents will never die, and code and architectural documentation will stay detached.


In order to reduce the overhead and eventual detach between code and documentation, we can look at non-architectural documentation, and see how the problem is solved here:

When documenting architecture, one dives into the aesthetics of code - why something in the world was perceived in a way it deemed necessary to break into into parts of a machine. Which immaterial (as in non-functional) values shaped the design of this machine over time. And why those values were agreed in the first place by the group of authors. Hence, architecture documentation has to become a part of the beauty of code.

In building architecture, plans have evolved from models and experiments, towards guidelines and procedures. I have mentioned Alberti earlier, also in the first chapter of my book, the inventor of the modern plan as original artwork. In recent years, building architecture has gone back to a much more integrated practise, with plans showing values and ideas rather than processes and concepts. This style has been made popular by Atelier Bow Wow. It enriches architectural section drawings, pushing them almost in the direction of perspective competition drawings*.

The myth of the right proportion

Recently, I've been to the Venice Biennale. In one of the exhibition catalogues, Pro Portio, this remarkable passage about the usage of proportions caught my eye:


proportion is [...] investigation of how elements and patterns are connected and interconnected across disciplines [...] universal proportions guide our understanding of creation and the dynamic dance between order and chaos

The art of connecting the different views and perspectives of an architecture, understanding the values that make up our perception of a "good architecture", that's proportion. It's putting the elements of the machine into the right relation to each other. It's the grid in responsive design, the harmony of Pattern Languages, the Fibonacci sequence in planning, Amdahl's law in scalability and, after all, finding the right proportion between documentation and code.

After Venice, we took the chance and drove up to a monument of proportion: Palladio's Villa "La Rotunda", which Colin Rowe called "the ideal villa". It is an example of perfect harmony, as Rowe writes in Architectural Review:


It was not in fact suggested that architectural proportions derived from musical harmonies, but rather that the laws of proportion were established mathematically and universally diffused. The Platonic and Pythagorean universe was compounded of the simpler relationships of numbers, and such a world was formed within the triangle made by the square and cube of the numbers 1, 2, 3 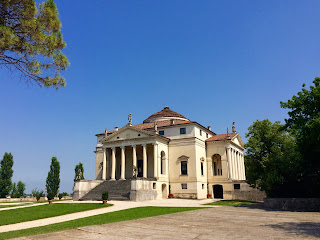 While it stands as an ideal of renaissance proportion, there is an issue: Inside it's absolutely hideous. It's a monument that proves proportions, or patterns, or a grid, can never be the sole source of beauty.

Which might be the reason taking pictures inside is not allowed. For us in software architecture it means while we need to follow a plan, and maybe even make a plan, we need to use proportions as a tool to understand why we made decisions to have relationships established. A 3-tier architecture is not better because it adheres to Fibonacci's sequence or the triangle made by the square. Gregor Hohpe has called this "paying more attention to the lines than to the boxes", or Stefan Tilkov the "Cross-System properties" to care for.

In a wonderful talk, Alvaro Videla hunts down some common myths (a little bit in Bret style). He argues the reason why we still believe them is because they "are easy to repeat and to follow, than to actually learning the whole methodology". Grids, patterns, number laws and thumb rules are myths, as one easily takes ratios for silver bullets instead of guidelines. An example of a myth from the talk is "Miller's Law", the thumb rule of number of elements a human can put in context. Over time, humans have adapted, and the rules need to be changed. It's these changes, and the rules, which is the most important part of documentation. The tradeoffs and their interaction, the timeline, and the change in context and understanding.

I have written about Choice Architecture before. I firmly believe an Architect is a gardener, and as such she needs to work with the seasons, with time, with taste and the weather, to allow emergence (or evolution if you want) of beauty of the plot. Yet it's true, choice needs to be limited, and we require categories and guidelines to make decisions. Taking those decisions, and being able to explain them to others, so they can make them on their plot, is the art of our profession.