At the end of the tunnel, there is always light; It just might be a train.

The Streets, Going through hell

The headline is a quote from the Palchinsky Principles, via Gojko Adzic's worthwhile talk "Make impacts, not software" (via @jbandi).


In May I visited the Lötschberg-Basistunnel, a recently completed 35km tunnel through the Swiss Alps. I learned two amazing things from the guide: 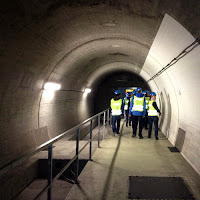 Gojko Adzic merges Design Thinking, SMART objectives, architecture assumptions documentation and business case calculation into “Impact Mapping”, singing the old hymn about analysis-paralysis and Water-Scrum-Fall. He claims that pre-planned software development “it's not a road, it's a tunnel”; rather than sticking to a linear backlog, project should have “something like a GPS”, a vision. Funnily that's how, in fact, tunnels are built. Roads on the other hand often are grids. It's not the question of a tunnel or a road - the distance makes the difference. A straight planned product with tons of features in a neat grid will not enhance usability. Creating a vision – an impact that everyone understands – will.  Being able to define a long-term goal allows for adjustment. Rather than just to “divide and conquer”, this is the art of the product owner.

As someone who moved from startups and design/advertising into traditional consulting I am amused by the now-mature generation of Web 2.0 firms which start to look into the very same traditional processes: product planning, sticking to delivery, definition of requirements which are backed by business cases, business process management and simple interfaces. It's good to see that the mechanic and the organic approaches to software development finally merge, creating a mature, objective and tolerant way of building technology that helps the people using it.
Posted by Jan at 21:54

Blue-Collar architect. This is an entirely private blog - I do not speak for my current or former employers. Contact: janpeuker.de or @janpeuker